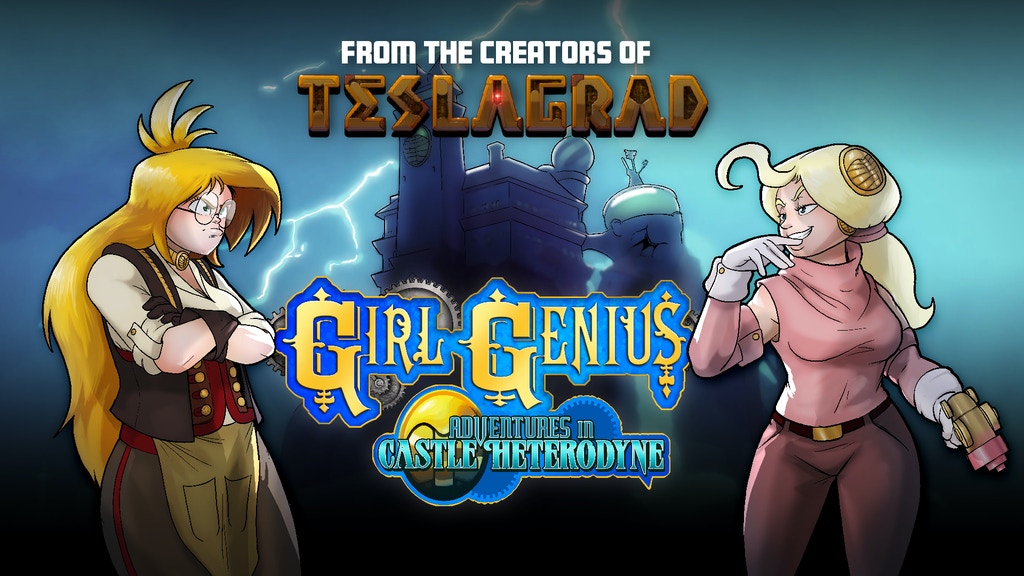 Latest Updates from Our Project:

I wish you all a happy winter holiday and a happy new year! I hope that this post will be a small present for you during the holiday, and we're looking forward to finally giving you the game next year! This post contains non-spoilers at the top of the post, and a clearly marked spoiler section at the bottom of the post.

We're working directly with the Foglios on the story in the game. While the story follows the general story beats found in the Castle Heterodyne story arc in the series, the game will feature parts of the story differently. The Girl Genius universe is massive, there's a ton of characters, relationships between characters, side stories within the stories and more. Therefore, we need to cut some of the interactions found in the series down to its core, in order to be able to actually produce the content within budget, team size and time constraints. The avid Girl Genius reader will notice this mostly  from Act 2 onwards, as certain story events will happen differently. But it is great to be working directly with the Foglios on this, and every Girl Genius reader should know that they approve and define the story beats together with us.


The spoiler section starts below

Thank you for reading, and I look forward to sharing more with you next year, and also, to finish the game and having you all play it! :)

Below this, I'll write about and show some game content to be considered spoilers.

Originally, we designed the tools and weapons to follow a tiered progression system. The Wrench weapon would be upgraded to Tier 2 and it would give a number of benefits from that tier.

This provides a much more exciting item system for the player. You have to decide what you want to spend your resources on, it encourages exploration and finding resources, and gives the player priorities to choose from. Do you want to have more damage on the Wrench now, or do you want to build the new functionality on the Grapple Gun? Also, you can find "Blueprints" in the game world, that are objects that must be picked up, in order to unlock a new functionality to an item. These are optional items, that opens up new playstyles, and in some cases optional "metroidvania-exploration". For example, the "Grapple Pull" blueprint is found in the game. When you build this, certain switches and objects can be pulled with the Grapple Gun, opening new areas for exploration. I think it will be a very cool addition to the game!

The vile Dr. Silas is your adversary at the end of Act 2, when he surprises Agatha, Gil and Zola while they're "discussing" recent events.

Dr. Silas has a fully operational battle clank, and Agatha must find a way to defeat him!

From concept to implementation

We always start out rough, and define and narrow things down from there.

So the concept of the fight is that the arena in the Serpent's Chamber is a "Tesla Coil" testing room. The blue circles are "Boss Platforms" that Silas jumps between, and each boss platform has a connected Power Globe associated with it (green circle). When the clank lands on a platform, its associated Power Globe is raised and interactable by using Agatha's tool, the Power Lantern on it. This activates the Tesla Coil on the boss platform, zapping the boss with lightning, thus disabling its energy shield and stunning the clank, and it gives Agatha an opportunity to damage the boss.

Here we see the implementation of the arena in the game and the different concepts. We have the walkable arena, the Boss Platforms and 3 Power Globes connected to each Boss Platform. The Power Globes will raise and retract whenever the clank jumps between platforms.

So here we see me playing against the boss in an earlier test run. I'm playing on Hard difficulty here, as we're testing how the boss plays when there's a lot going on. The normal difficulty setting will be tweaked down  this. You'll see that there's more complexity added to the fight as the fight goes on, and Silas threatens you with more attacks. I'll break it down for you.


The fight is all about timing, avoiding damage and managing threat complexity as the fight goes on. Also, I think that the madness of Silas is showing through in the fight. He really wants to DESTROY you! I hope that the bossfight excites you as much as it excites me. :)

Thank you for reading, and have a happy new year!

I promised I would share more from our trip to Tokyo for Tokyo Game Show, so here it is, finally!

First of all, the trip was incredible.

It was fantastic to experience the lovely Japanese culture, and it was very exciting to show off the game.

We had a shared booth called "Norwegian Games", with 11 game dev companies from Norway.

The booth was present for 4 days, where 1.5 of those days were business days with press and meetings, and the rest were consumer days.

Read about the Norwegian Games Booth and Girl Genius in the Japanese media "4Gamer" here.

The writer unfortunately misunderstood a few things about Girl Genius in the short amount of time we had with him, but it was good to get the attention anyway, since the magazine is one of the largest media for games in Japan.

We showed off the game, both on PC and on the Steam Deck.

We also brought a Nintendo Switch build that I didn't show off at the booth, but used during meetings.

While we did not have a massive queue for Girl Genius like the Asian games, we had players playing all the time.

My big takeaway from showing off the game was that people enjoyed playing!

It is certainly not guaranteed, because art style and gameplay preferences can be quite different in the Asian countries.

I felt very proud to show off Girl Genius and the game to Asian people, and seeing them enjoy it.

My favorite moment was when a Japanese mother and her two children, aged around 8-13 I think, played the game. I thought it was so cool to see them laugh at the "right" moments, pointing at the screen and telling their mother how cool the little Dingbot is.

That was special to me.

Other than showing off the game for the players, we also had some really good meetings.

First of all, I got a meeting with Nintendo Japan, which is not something that happens everyday, to put it mildly. I showed them both Girl Genius and Teslagrad 2, and got good feedback.

Also, the Norwegian Embassy in Tokyo visited the Norwegian Games stand, and they were really excited to see how big Game Development is, and also that so much quality content is produced by Norwegian developers.

We got invited to a spectacular reception at the Norwegian Embassy Residency in Tokyo. What an experience!


It was an intense week, where most of it was work. But we also got to check out some sights in Tokyo before TGS kicked off.

We visited the Zoo, in the park close to the Studio Ghibli Museum.

We also visited the Studio Ghibli Museum. Weren't allowed to take pictures inside unfortunately, but it was really cool!

Here's me and Lars Erik visiting Fuglen, a cafè from Norway that opened up in Tokyo as well. I am quite destroyed in this picture, as I just came in the door from 100% humidity and heat, and a Typhoon outside the door.

The last day before leaving Tokyo, a typhoon came in. We flew out of Tokyo through a lightning storm.

It was an incredible trip.


Thank you for reading!